There aren’t many film buffs left in the New England area who are as passionate about print film and getting eyeballs in front of movies as Josh Thomas Gravel and the Arkham Film Society – a Providence, RI, based film group dedicated to, at their core, showing movies. As a film lover myself as well as a native of Rhode Island, I knew sitting down with Josh and picking his brain for an NEMMC post was a must. Thankfully, Josh found some time amidst his busy schedule of programming and penning film reviews to answer some questions for NEMMC. 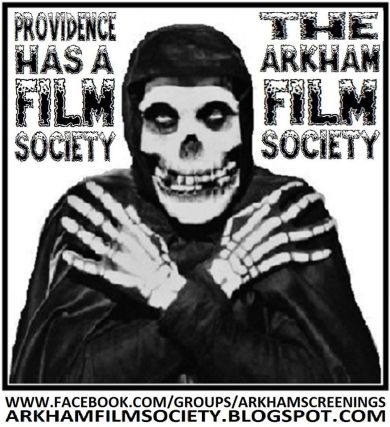 New England Media & Memory Coalition: What is the Arkham Film Society and when did it start?
Arkham Film Society: The Arkham Film Society is basically me – independently booking and hosting screenings of cult, horror, exploitation, or otherwise just strange movies with the help of a couple friends. The events are held around Rhode Island and occasionally Massachusetts and we try to present these movies on actual film whenever possible. We have gotten to the point where we are hosting (almost) monthly screenings as well as occasionally collaborating with film festivals. At the moment most of our events in Providence are being held at The Black Box Theater. They were attendees of our events prior to us working together and they have been extremely  helpful and generous with their space.
Our current screenings are a mix of 16mm and digital (when a particular title either isn’t available or would be overly cost prohibitive to screen via film). We have not had the pleasure of sharing any of our 35mm prints with an audience in quite some time due to many cinemas going digital and the higher premium placed on those who haven’t, but we are currently in talks with a couple of potential venues to bring back our 35mm screenings.

As to the A.F.S.’s origin story it is fairly simple: I worked on the Rhode Island International Horror Film Festival as a programmer for a number of years with my friends, Ric and Scott, and when it became obvious that our abilities were being limited within the festival organization we sought a way to continue programming outside of the festival.

The first Arkham event proper was in February of 2007 and it was a double feature of MANIAC (1980) and THE REDSIN TOWER (2006). Over the years both Ric and Scott have scaled back their involvement but are both still involved and still help out.

NEMMC: What kinds of films does the AFS have in its collection? With respect to collecting does the AFS focus on any particular format or genre? AFS: The film print collection is a small but varied grouping of films on both 16mm and 35mm. We have classics, comedies, documentaries, dramas, and of course horror…lots of horror. As for focus I am not focusing solely on a single format as that would limit our screening potential, but when purchasing new films for the collection I do tend to stick with the popular sub-genres within the cult film world such as horror, exploitation, and action, but in the case of someone donating film to the collection we take whatever is offered. We are always open to accepting any donations of film that come our way and are working to properly catalog everything and store it the best we can.

NEMMC: Does the AFS specialize in showing certain film genres?
AFS: I like to say that we present “cult films of all genres”, because every genre has their unsung gems and cult oddities. Admittedly when looking at our schedule we are definitely horror heavy – especially European horror heavy – but in the past we have branched into classics such as, NIGHT OF THE HUNTER (1955) and YOJIMBO (1961), more mainstream cult fare like JURASSIC PARK (1993), and even once co-presented a couple of classic musicals on film with an organization from Brown University screening THE RED SHOES (1948) and SINGIN’ IN THE RAIN (1952). Overall I am open to showing anything that I enjoy and that people should see in a theatrical setting. However, since my main interests lie in horror we tend to show a lot of horror.
NEMMC: Why physical film in the first place? Where did that interest originate?
AFS: I can’t fully explain why film but it probably has to do with the fact that I grew up going to the movies practically every weekend and then gravitated to programming and then actual film projection. I guess it’s partially a nostalgia thing as I grew up watching movies projected on film, and in all honesty digital can not exactly replicate that viewing experience. It isn’t even a matter of having a flawless film print because sometimes when you watch a scratched and possibly faded 30 year old film print there is a certain sense of history there that isn’t replicated with a Blu-ray or digital film. It’s probably an interest I have always had which has just come to the forefront since I’ve been working with films.
NEMMC: Does the AFS have a larger mission aside from exposing people to the films themselves?
AFS: At the moment no. It would be fantastic to someday have a larger organization and potentially a venue that we could use for both programming and educational purposes such as screenings for schools and lectures about film history. But currently the A.F.S is essentially just an expensive hobby.
NEMMC: To date what sorts of New England-based collaborations has the AFS been involved with?
AFS: We have worked with a number of film festivals such as SENE, The Providence French Film Festival, and of course we program the Rock and Shock Film Festival held at the Rock and Shock convention in Worcester, MA, every October. We have also collaborated with other organizations such as All Things Horror for a Boston Strong charity screening of RE-ANIMATOR (1985), the Coolidge Corner’s @fter Midnite series with a screening of BRAIN DAMAGE (1988), and we have helped source films for the NecronomiCon convention in Providence.
NEMMC: Can you tell us about some of the more memorable acquisitions the AFS has received over the years?
AFS: I’ve had a few fun adventures in film hunting. A couple memorable moments include a time Scott and I drove out to Poughkeepsie and rummaged through the garage of a guy who had some films. We ended up leaving with six feature films that day including the cult slasher film MADMAN (1982).

A more recent experience was when my friend and fellow projectionist, Taylor, spent some time assessing the projection booth in an old theater in East Greenwich ,RI, which is now a performing arts space. There was some hope of getting the projection equipment up and running again since most of it was still in the booth. Unfortunately there were issues with the power running to the equipment which would have put the cost of the project way over the interest level of the organization involved (which I don’t blame them for as it started as a small project and quickly ballooned into a major renovation).

The fun part of that day, though, was going through the booth and storage area finding old film reels and shorts such as the short documentary BIGFOOT…MAN OR BEAST (1972).

NEMMC: How extensive is the film collecting community?

AFS: It is actually pretty big but also a bit private; while there are many high profile film collectors such as Martin Scorsese and Quentin Tarantino there is also a huge number of film collectors who are projectionists and theater owners with a passion for the medium.  But it certainly is a welcoming and truly international community once you start to communicate with and learn from other collectors.

NEMMC: Are there any inherent risks with collecting film? What are some of the logistical challenges (financial or otherwise) in collecting film?
AFS: As for what we are doing there aren’t any real risks. If we had any pre-1952 prints on nitrate stock that would be a fire hazard and I’ve heard of people having legal troubles if they have a large studio title, but we have neither so we should be good.
There are numerous logistical problems when collecting film and first and foremost is space. Film prints take up a sizable amount of space and when you get into the double digits of prints you have to start dedicating space to storing them properly. Films need to be stored in a low heat and low humidity environment or the film itself can fade and degrade, so it’s best to have a storage space with heavy duty shelving, temperature control, and a dehumidifier running – which all adds up.
NEMMC: What does the future hold for the AFS?
AFS: As of now we will continue our regular screenings in Providence, RI, and we hope to both get back to presenting films on 35mm again and do more events in the Boston area. If anyone has a theatrical venue that would be interested in having us host an event or wants more info on what we do feel free to contact me through our website Arkhamfilmsociety.com.
Loading Comments...
Comment
×